If you need to repair your VOX Amplug, you may be able to fix it, quite simply.

I’ve lately been getting a lot of traffic from Google about the VOX amPlug I/O, and I’m afraid I can’t offer much help with that device – I’ve never used one.

Something important to know about that device:

The VOX amPlug I/O is NOT a standalone headphone amp.

But no. That would be too easy. Sorry folks.

Unfortunately, I started having trouble with it after a couple days: I couldn’t get any sound out of it at all. I triple-checked that the batteries weren’t dead, that the new ones weren’t in wrong, that the knobs were all turned up, the works. Jiggled the jacks. Nothing. Dead quiet.

I looked online and found other comments along the same lines (paraphrasing: ‘This piece of crap worked great when I got it, then broke in a couple days!!!’).

I thought there might be a general problem with this otherwise nice piece of gear. Then I stumbled upon this guy, who really seems to have it right:

You’re plugging the headphones into the wrong jack!

I’m pretty sure you are. I was, too. My VOX Amplug AC30 was working fine, still works great many months later.

Certainly, this won’t fix everything: you can still whack your Amplug on a door frame and break off the 1/4″ guitar plug. Your headphone jack may get squirelly over time. Seems like virtually every headphone jack does. The knobs will probably crackle, eventually. But if you know someone who thinks the Amplug is broken, have ’em try this before complaining. The Amplug series really IS nice.

If this works for you, do me the favor of leaving a comment to let me know I’ve helped you!

So why does this keep happening?

OK, to the guy with a UX hammer, most every problem looks a bit like a Usability nail, but I think this one really applies. It’s not measured behavior, I realize, but since This is What I Do™, and I’ve got some understanding about humans and usability, I’ll venture an explanation for WHY this is happening.

First, VOX (Actually, KORG) uses embossed black-on-black labels for its headphone and AUX input jacks. I think this is to maintain the “Amp”-like look of the product. This means the labels are really hard to find, and because the text is tiny, even harder to read. A little dab of white paint on the letters would help with this.

Next, if you’ve bought the Amplug only to use as a headphone amp, you may not be interested in the AUX input feature that lets you tap an MP3 player into the unit so you can play along. Most people won’t have handy the male-to-male 3.5mm stereo mini cable required to use the AUX feature. You have to want to use it, and go buy the cable. You probably took a passing look at the instructions on day 1, and filed away the knowledge that you could put an AUX source into it “someday”.

Finally, the above two problems are compounded when we start to think of the musician’s mental model of the Amplug. Not everyone is fortunate enough to have a good grasp of electronics, but even those who do tend to think of signal as flowing “like water in pipes”. This means people are probably creating a mental model of the Amplug signal flow that originates at the guitar plug and flows straight through to the jack on the far side of the Amplug. The Amplug, in their mind, becomes a layer between the headphones and the guitar, and the signal will take the shortest path through that layer.

The thing is, that horse-sense evaluation is not at all correct. The jack on the far-side of the Amplug from the guitar plug is the AUX in jack! 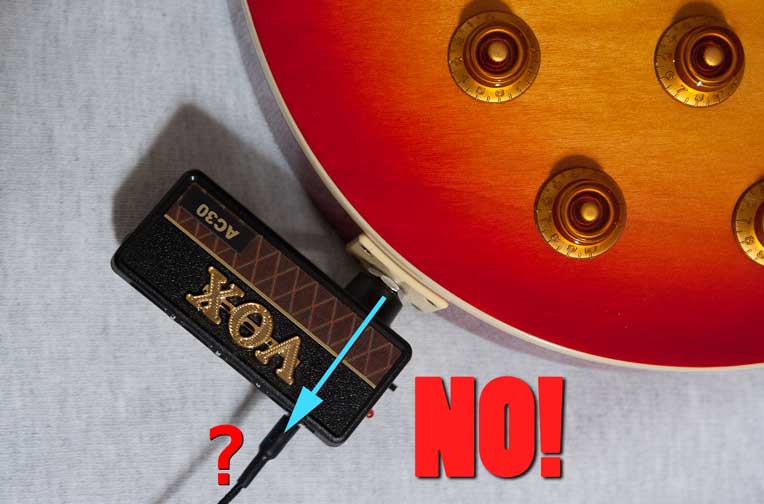 The signal that flows through the Amplug is not under any restriction to flow in a straight line. It flows where the electronics take it. And in the case of the Amplug AC30, signal flows around a corner and out the far end of the Amplug. 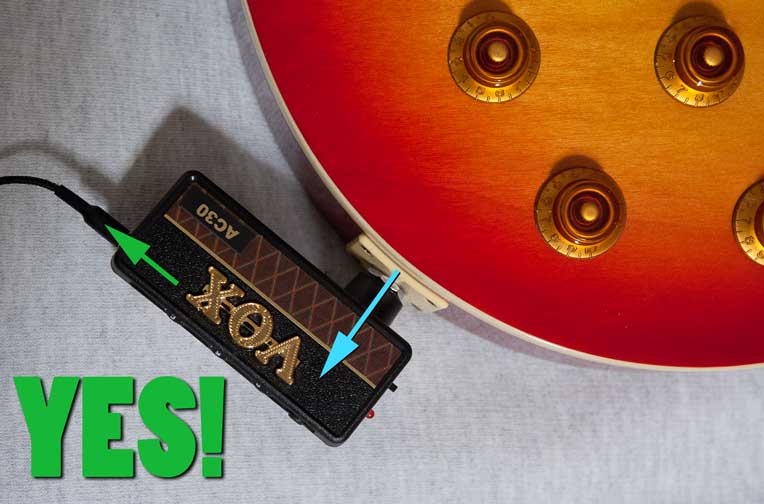 Obviously, to get sound out of the Amplug, you have to plug the phones into the right jack. But VOX has set up the user for failure, by making the labels all but invisible, and designing a signal flow that really requires labels for people to get right, if they don’t have the manual handy.

My guess is that the signal flow was designed by an electrical engineer – having the inputs at one end and outputs at the other looks electrically convenient to me (and I’ve done a bit of electronic designing/building).

And believe it or not, diagnosing, explaining, communicating: yes, this is what I do.

This site uses Akismet to reduce spam. Learn how your comment data is processed.